From Ullapool I headed East to Lairg, changing my initial plans which would have taken me North to Tongue then East along the North coast road to John o’ Groats. I had decided on this course of action following a very close encounter with a vehicle on the way to Ullapool. Facing the oncoming traffic (as you do), means that one is not always aware of vehicles heading in the same direction that perform overtaking manoeuvres without consideration. Just inches away from serious injury or death, I believed the coast road might have too much traffic and reworked my route accordingly.

From Lairg I would be spending the last week camping wild, finding a spot to pitch with suitable shelter from the elements as well as a supply of water. This turned out not to be the case, a good look at the maps indicated a couple of buildings, and although there was nothing to indicate exactly what they were, I sensed that they were bothies, well placed on my route to have short walks for two consecutive days with time to stop and listen to the England v Wales World Cup Qualifier on the wireless.

Into the last week, I was counting down the days to the end, as the forecasts of the maximum night temperatures were dropping in correlation. The number of pairs of socks in my rucksack was also decreasing at a steady rate. Why carry dirty, wet and threadbare socks?

The final three days were spent walking along quiet roads, the wind blowing across the bleak moors and farmland that reminded me of a landscape closer to home. The roads were long and straight and uninspiring, but seeing the coast and the island of Stroma as I approached John o’ Groats raised spirits as the end was now almost literally in sight.

As I walked towards Dunnet Head from Jo’G’s, (day 174), the rain gave way for a brighter afternoon. Spurred on, I quickened along the empty road of the headland, the milestones indicating two miles and then one mile to the lighthouse. At the Northern most point of the island I sat alone and gazed out towards Cape Wrath, the sun casting a beautiful orange glow along the coast. I was 472 miles from my start point at Lowestoft Ness, although I had walked two thousand and seventy odd miles in 174 days to arrive here, (taking the scenic route I suppose). This was the end of my incredible journey and I felt a warm sense of pride from what I had achieved, and privileged to have seen so much of this land, though there is still much more. 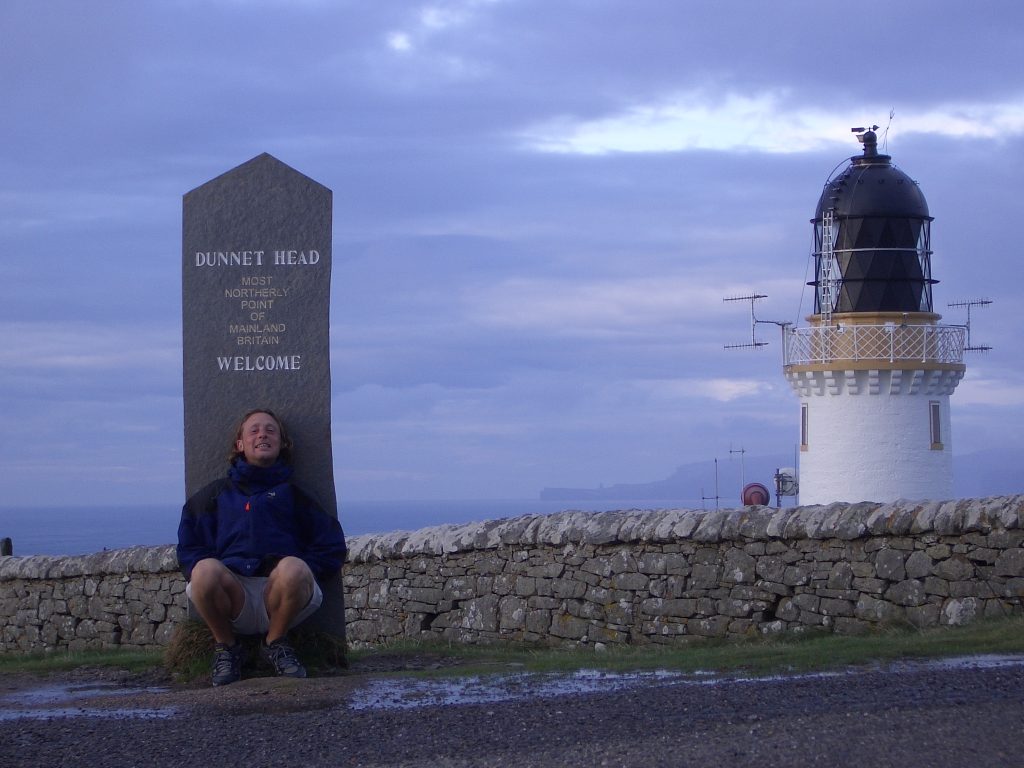