National Trails for most of the way,

the route passes through six

National Parks and over forty counties,

and designated areas of

in England, Scotland and Wales.

The route is approximately 2000 miles long 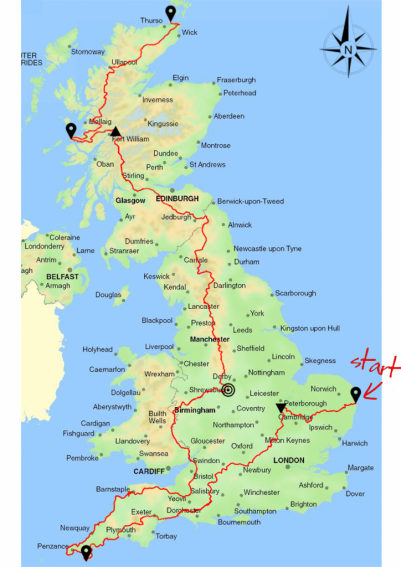 Leaving Lowestoft and heading west along the Angles Way through ancient grazing marshes and meadows, the path heads along the Waveney Valley, meandering with the river to its source at Redgrave Fen. Onwards to the well-preserved portion of historical Breckland at Knettishall Heath Country Park to meet the Icknield Way, possibly the oldest road in Britain, with a history dating back to Neolithic times (4000-2000 BC).

Shadowing the original line of the Icknield Way as closely as possible along the chalk spine of southern England, the route offers splendid views over the surrounding countryside, and is dotted with archeological remains, historic villages and towns, nature reserves and miles of beautiful green lanes. A deviation from the Icknield Way leads to Holme Fen, Cambridgeshire and at 2.75m below sea level, will be the lowest point of the journey.

Rejoining the Icknield Way, the route continues to Ivinghoe Beacon in Buckinghamshire to link with The Ridgeway National Trail. The Ridgeway passes through the gentle and wooded countryside of the Chiltern Hills in the east, crosses the River Thames, and travels along the open and relatively isolated top of the chalk downland ridge to the west. Scattered with Iron Age forts, ancient burial mounds, and chalk hill figures, The Ridgeway, with far-reaching views, runs as a broad ancient track to the World Heritage Site of Avebury in Wiltshire.

Heading southwest towards the Dorset coast, the 137 mile long Wessex Ridgeway recreates the final stage of the Great Ridgeway, an ancient highway from Holme on the north Norfolk coast, originally, to the coast in Devon. The route skirts Salisbury Plain before heading south across the Chalk Downs, following the high ancient ridge as much as possible before descending into Lyme Regis.

At this point the route joins the South West Coast Path and heads toward the southern tip of the island at Lizard Point in Cornwall. Unable to cross river estuaries on foot, inland detours are unavoidable, however, a traverse of Dartmoor National Park will provide a sufficiently interesting distraction before returning to the spectacular coast path. From Lizard to Land’s End, then northward, continuing along the coast path to Barnstaple at the edge of Exmoor National Park.

The MacMillan Way West, a 102 mile waymarked path, runs from Barnstaple on the North Devon coast, through deep wooded valleys initially, before rising and crossing Exmoor, the Quantocks and the Somerset Levels to the historic town of Castle Cary. Glastonbury Tor and Cheddar Gorge offer further delights of the West Country before rounding Bristol and making toward the Severn estuary.

Crossing the River Severn by the famous bridge to the western bank, Sedbury Cliffs are the official starting point of Offah’s Dyke Path. Heading north through the pastoral lowlands of the Severn valley, thick woodlands of the Wye valley and the stern uplands in the Black Mountains, the path follows quiet and beautiful border country rather than staying with the line of the ancient Dyke regardless.

At Clun, the path joins the Jack Mytton Way, Shropshire’s Long Distance Bridleway. Using this path as a guide the route now heads east, taking in the high ground of the Long Mynd and Wenlock Edge to Much Wenlock before utilising part of the Monarch’s Way and Staffordshire Way to reach Cannock Chase, a designated Area of Outstanding Natural Beauty. A short distance away along footpaths and canal towpaths is the point on the mainland that is furthest from the sea in all directions.

Rejoining the Staffordshire Way and heading north through Abbots Bromley and Rochester, the route then enters the Peak District National Park near Ashbourne and winds its way through the White Peak area, following the Tissington Trail, High Peak Trail and the Limestone Way to Castleton. A short walk over Mam Tor descends to Edale, the official start of the Pennine Way, the first long distance path in Britain.

Through the wild moors of the Dark Peak, Yorkshire Dales and Cumbrian Fells and on to the remoter parts of the Border Ridge and the Cheviot Hills in Northumberland National Park, the Pennine Way takes in some of Northern England’s finest scenery and features. Malham Cove, High Force, High Cup Nick and Hadrian’s Wall are met on the way to Kirk Yetholm just over the Scottish border.

From Kirk Yetholm, St Cuthbert’s Way, another long distance path follows a ridge climbing westward, then across Grubbit Law to Morebattle. The route continues to Cessford, where the remains of the castle can be seen, then follows the Roman Road, Dere Street, to Maxton, then along the River Tweed and across the Eildon Hills to the 12th Century Melrose Abbey where St Cuthbert began his ministry.

The Southern Upland Way, stretching from coast to coast, offers another obvious path from Melrose to Traquir, home of the oldest inhabited building in Scotland, Traquir House. From here, the course of disused railway lines and canal towpaths are mostly used following a north westerly direction to reach the beginning of another long distance path at Milngavie, on the outskirts of Glasgow.

The West Highland Way heads north from the lowlands, follows the shores of its largest freshwater loch, crosses the Highland Boundary Fault and heads on into the Scottish Highlands. Flexibility in planning allows for high-level alternate routes along the way from here. The route includes the summit of Ben Nevis, the highest point of the island at 1343m above sea level, before dropping to Fort William and heading on to the next objective to the west.

Rounding Loch Eil to the north and heading southwest from Glenfinnan along the southern shore of Loch Shiel, the route then strikes westward out to the end of the Ardnamurchan peninsula. Mull to the south, Muck to the north, the Point of Ardnamurchan in Argyll, the western most point of the British mainland, looks out beyond the Inner and Outer Hebrides to the Atlantic Ocean.

From the lighthouse, the final leg of the journey initially returns to Loch Shiel then heads north east, winding its way through the North West Highlands via Knoydart, Glen Shiel, Glen Affric and Torridon. Walking from Ross to Sutherland, and on to Caithness, John o’ Groats offers an opportunity to acknowledge a popular achievement on the penultimate night. The final day, strolling along the coast, with the Orkney Islands to the north across Pentland Firth, will provide an exceptional ending to the challenge at Dunnet Head. 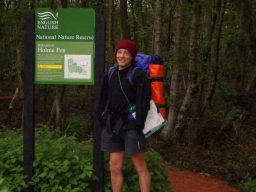 Lowestoft to the Lowest.

Lowestoft to the Lowest.

03/05/2004
Reading a text message before departure, “What a lovely day for you to start such an adventure.” Indeed. The first five days along the Angles Way the sun shone and all was well. The roads (more than expected), were pounding the soles of my feet, and new footwear (not worn in, stupid I know), provided […]

Come on my sun.

Come on my sun.

20/05/2004
Leaving Holme Fen, drizzle turned to downpour and I was happy to reach the Elephant and Castle in Wood Walton at midday. This drowned rat was soon joined by some of the locals, also drenched from a do at Stilton. Having dried out a little and after a complementary mug of tea and a ham […]

Roads to Kernow, where?

Roads to Kernow, where?

30/05/2004
Heading along the beach from Lyme Regis my attention was immediately drawn to the cliffs as I heard the sound of a rockfall, a reminder, if one were needed, of the instability of this environment as the elements work to destroy that which has been created over millions of years. I had two half-days on […]

From Kernow With Love.

From Kernow With Love.

12/07/2004
Text for this section has vanished. Like an old oak table. There is a team of crack experts working to recover the missing files. 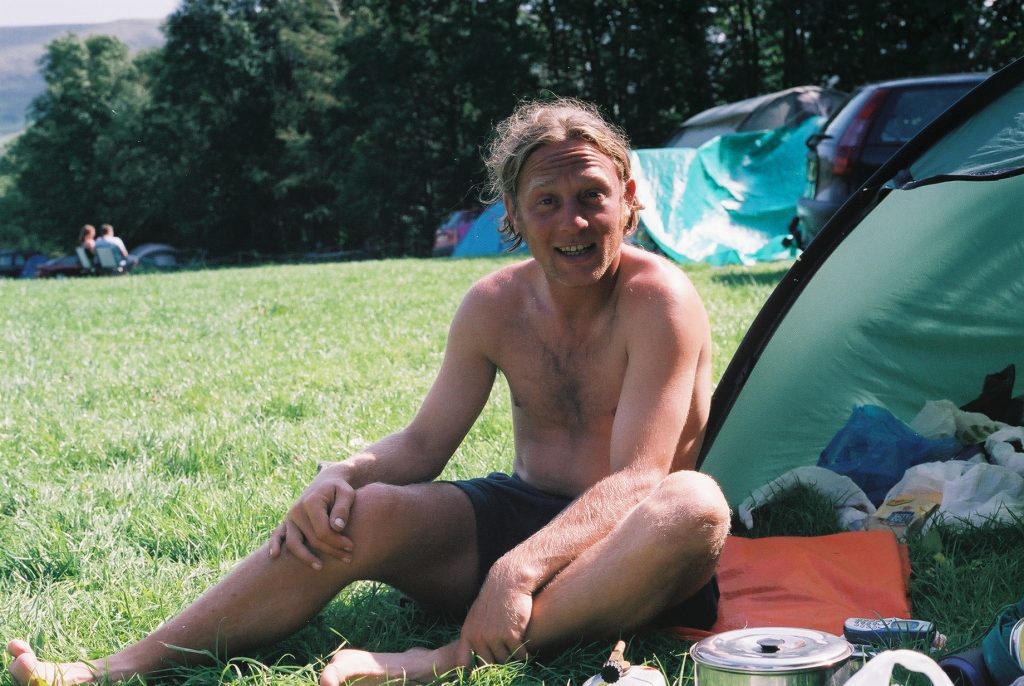 01/08/2004
Setting out along Offa’s Dyke Path I was again accompanied by acorns, the symbols used to way mark all of the National Trails. The walking was easy going, following the Dyke at times, then dropping down to the River Wye and then a 10 mile stretch to Hay-on-Wye along the high level route offering views […] 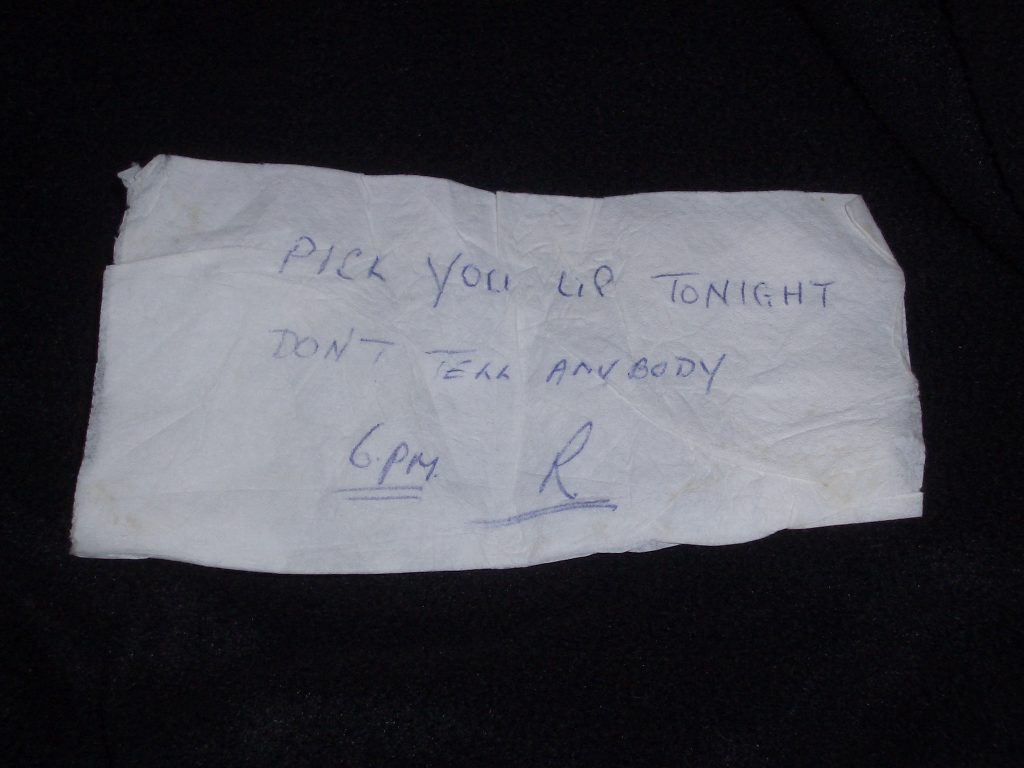 22/08/2004
It was great to see so many familiar faces again and to catch up with the news, and I set off from Edale along the Pennine Way on a sunny Sunday, refreshed and happy. This, of course, is where the Island Limits story began. I had completed a North-South Pennine Way walk on 6 June, […] 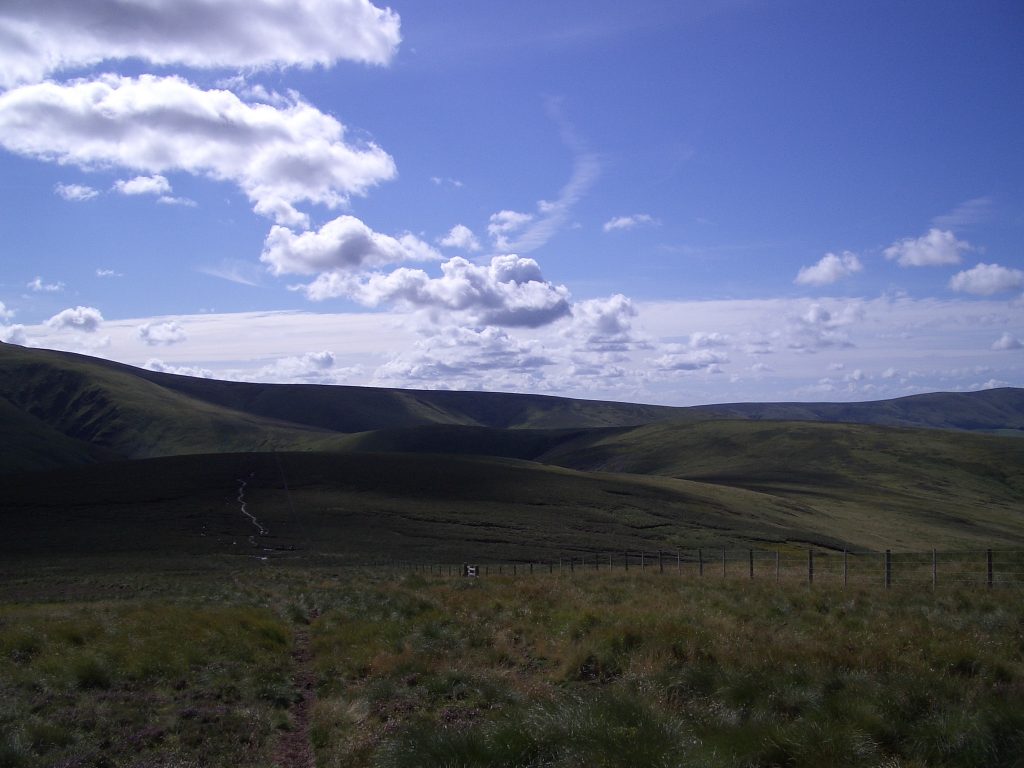 07/09/2004
At the end of the Pennine Way I had completed over 1500 miles of my marathon and the legs were feeling a little heavy. Perhaps the heavy going had begun to take its toll or maybe I was feeling sympathy for our Olympic athlete! Who knows? It would be another week before I reached the […]

08/09/2004
It seemed to be fate. Not reaching the Upper Limit at the first attempt meant I would be there on a day like this. Perfect weather conditions and I didn’t see a soul until I reached the crowded summit.

15/09/2004
I headed down from the summit of Ben Nevis by the tourist trail, a very busy and rather uninspiring route if like most of the people, used for both the ascent and descent. I camped in a sheltered spot offering a splendid view from the North. After another couple of days of gorgeous sunshine, ensuring […]

04/10/2004
From Ardnamurchan the weather was rancid. After such a beautiful day at the Western most point of the mainland, my journey would now continue through a sustained period of wet and windy weather. The first night I woke as the wind battered my tent. I decided to turn it around as the rain lashed down […]

14/10/2004
From Ullapool I headed East to Lairg, changing my initial plans which would have taken me North to Tongue then East along the North coast road to John o’ Groats. I had decided on this course of action following a very close encounter with a vehicle on the way to Ullapool. Facing the oncoming traffic […] 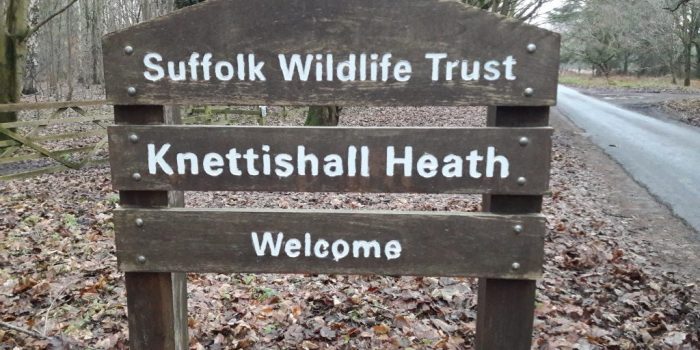 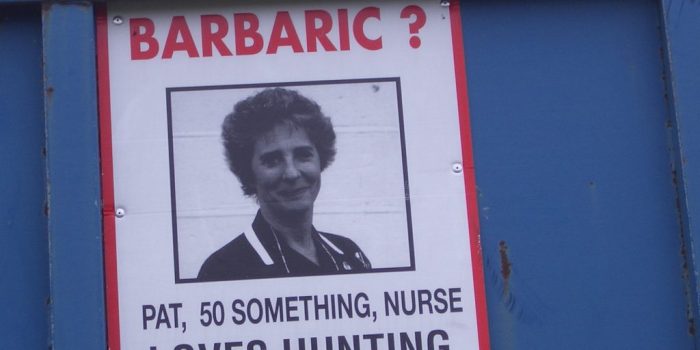 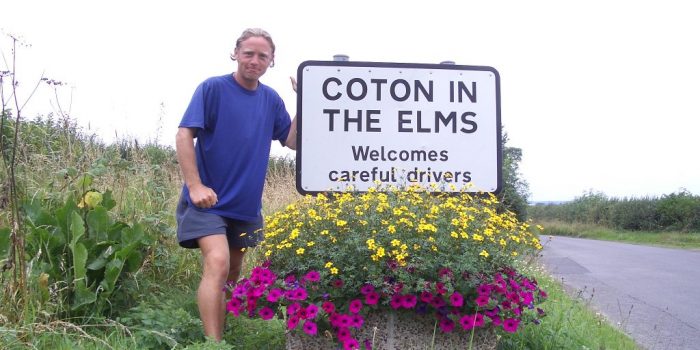 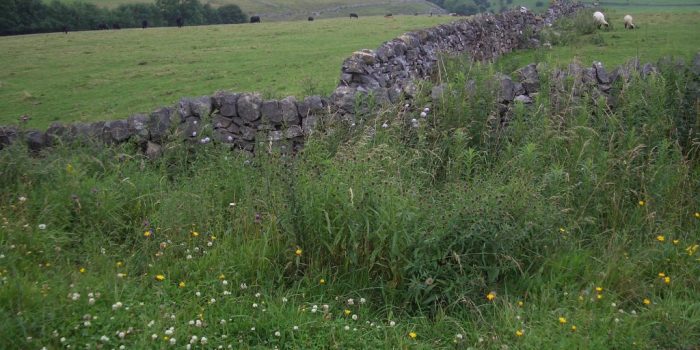 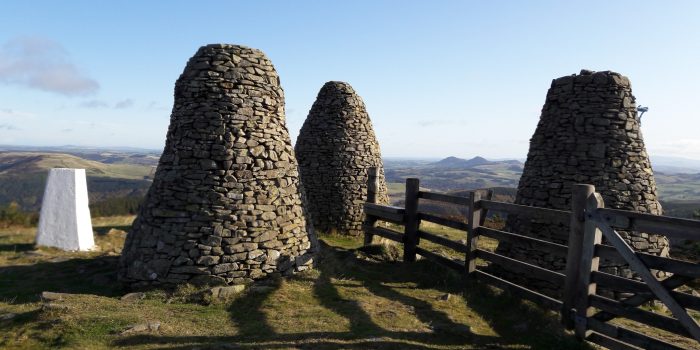 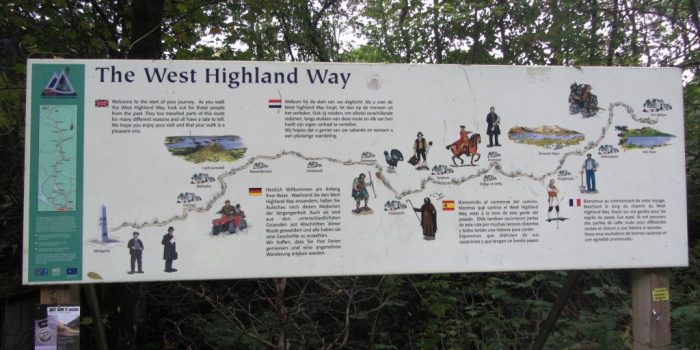 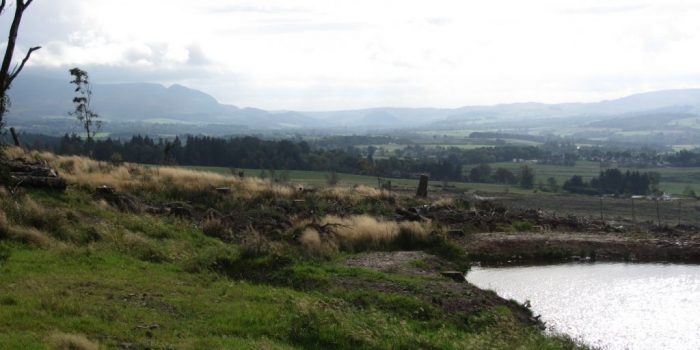 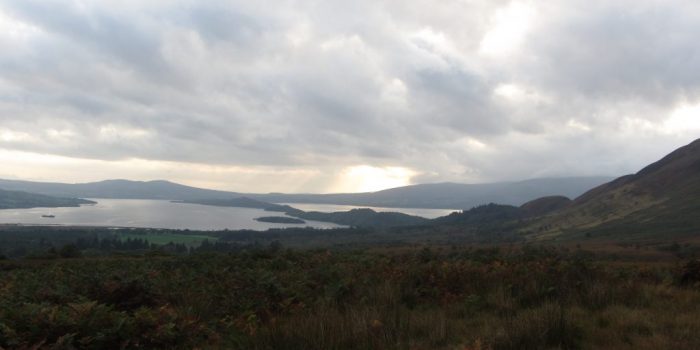 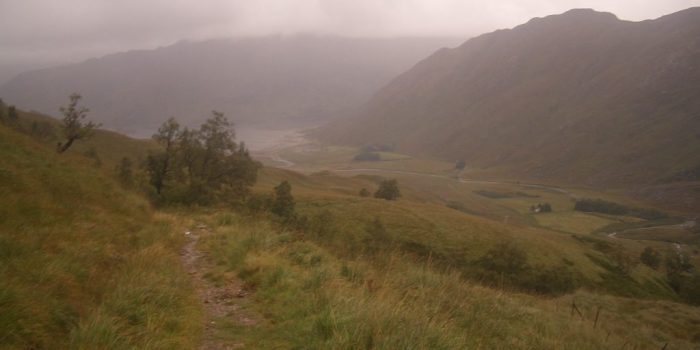 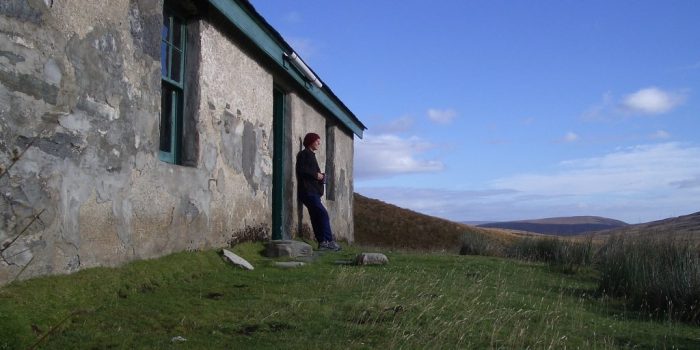 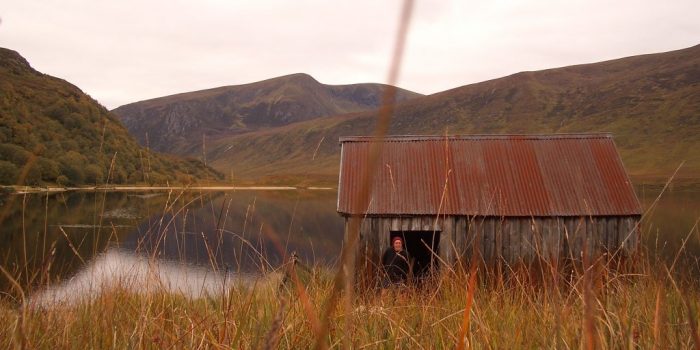 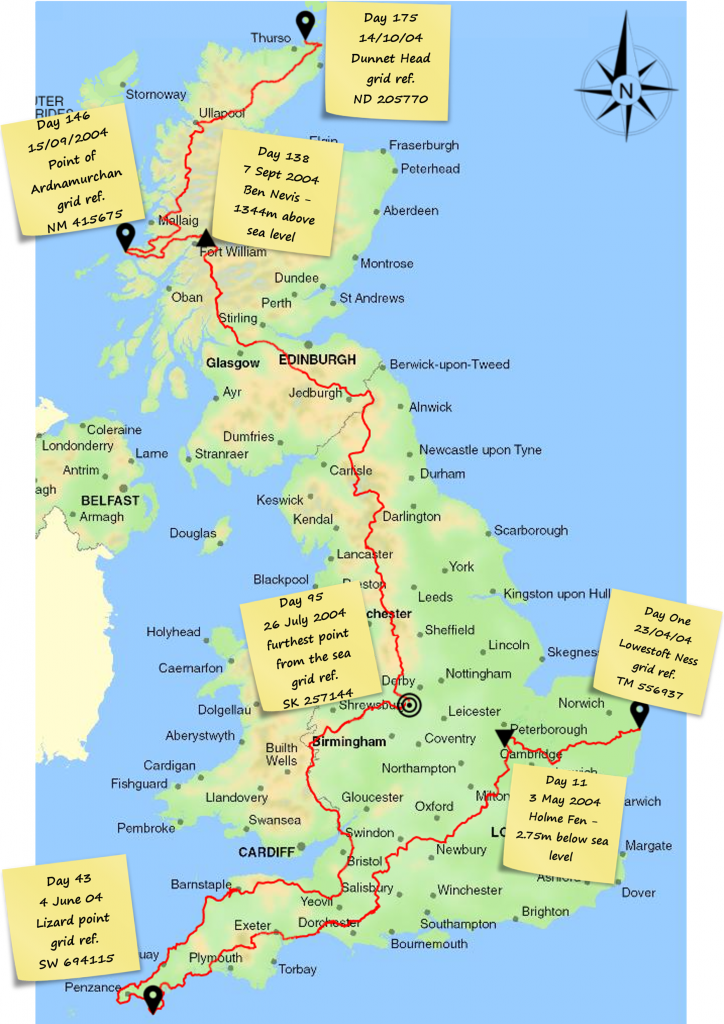